I have thought about John Wolfe of Season of Shadows often since he passed away earlier this year. I wanted to do something in memory of him as part of my haunt this year, and it wasn't much, but I used a red light to illuminate our house. Anyone familiar with Season of Shadows probably remembers those red lights that he used in his haunt. It was one of the things that made his haunt unique, in addition to his amazing props. He was always so kind when I talked to him, and always had nothing but good and encouraging things to say about my haunt. I felt bad that I didn't even know he had been sick when I heard about his illness. I like to think that he is still celebrating Halloween on the other side, and continuing to bring joy to others. 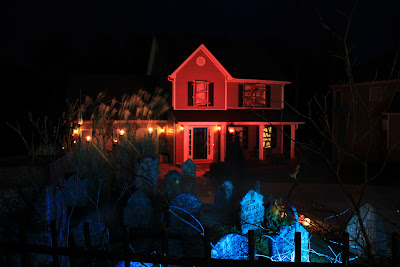 I was thinking of him during setup, too. It's a shame he wasn't around for one more Halloween!

He was one of the first Halloween blogs I stumbled onto several years ago that gave me the bug- the yearn to start a haunt. He will be missed.

I think it's a lovely tribute.

I think of John often too. After his illness set in, even a glass of water meant to much to him, that I often think of him as I draw a glass of water from the tap. So nice of you to leave the light on for him, his way.

It's Goldie from SeasonofShadows. I wanted to deeply thank you for posting and sharing your tribute to our beloved John Wolfe this Halloween. I know many of our SoS family did their own unique thing to remember John in their yard haunt but your the first posting I've found on line and I wanted to thank you for sharing. I believe we all have felt him in our own special ways and I'm certain he was zipping around to everyone's homes on Halloween and loving it. LoL, he must have covered so much ground. I miss our John something horrible and I cannot believe as of next year March 7 one whole year has passed since he left for home. Please know in your heart how much he loves you and all of you and is very much with you in your own special ways. I know he would want me to wish all of you the happiest of holidays and to have a fantastic new year!! Thank you for sharing your tribute friend.