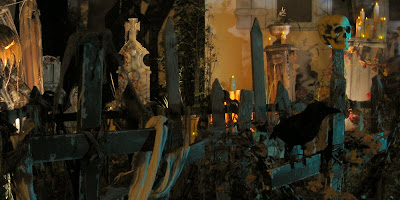 I am still shocked at the news that one of the haunts that influenced me the most in making my own haunt will not be doing another display. I received a lot of help from Rob, of Skull and Bone, on several different questions I had in the past. He was always more than willing to help, and was actually one of the first experiences I had in learning how willing fellow haunters can be to help those who are just starting out. If you are familiar with his haunt, you will see some similar things in my haunt that I borrowed (stole) from his haunt. I learned to make a Bucky corpse from the great tutorial on the Skull and Bone website, and learned to make my flickering lanterns with help from Rob. I will truly miss this great haunt, and can only hope that it will make a return someday.

Labels: one of the greatest, Skull and Bone, Yard Haunt

yet again another beautiful and creepy prop. i always have problems doing the cutting part on the ends to give my ghost the natural look.
great job