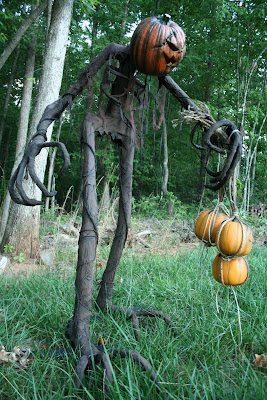 I have had a lot of questions about my "Grim" prop that I built for 2008. I plan to put a full blown tutorial on my website sometime, but for now here is a brief step-by-step tutorial with some never before seen pictures. 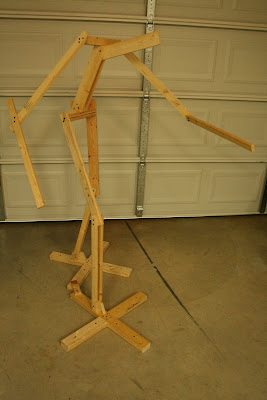 I stated with a basic wooden frame, made from 1X2's and 1X3's. I actually stood in the position I wanted "Grim" to be standing in so that I could get the angles of the arms and legs right. I wanted the legs and arms really long and the torso a little smaller. 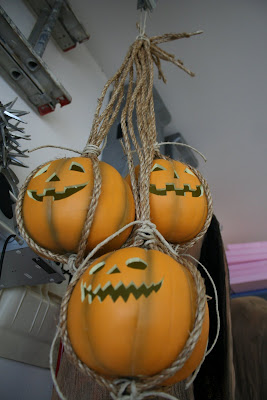 I came up with this idea from seeing the three skulls on a rope decoration, and thought that Grim needed to be holding these as sort of his "captives". I wanted them to have rather happy faces, as they do not realize the terror they are about to experience. I lit these using three small candelabra sockets that I got from Lowe's, and 4 watt nightlight bulbs. 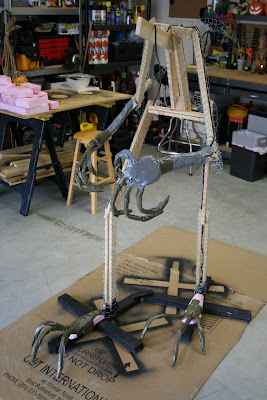 Next, I covered parts of the body in chicken wire to break up the blocky look, and made a few "thorn-like" projections. I made the hands and feet out of wire coat hangers, paper towels and duct tape. I also ran the wire at this point for the light that would be in the head, and the string of pumpkins that he would be holding. 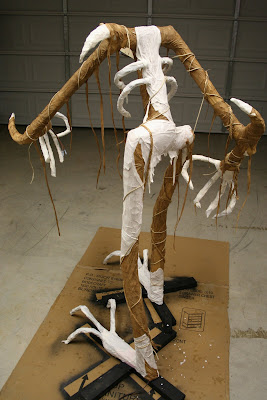 I used paper mache for the skin, (paper towels, and an Elmer's glue and water mixture: mixed to about a 50/50 ratio). I used both brown and white paper towels... no particular reason, I just had both and was experimenting. The brown paper towels were probably stronger, but wouldn't stick as good as the white paper towels. I used about three layers of these all over the body. While it was still drying I dipped sections of different kinds of rope and cord in the Elmer's glue and water mixture, and wrapped them around the legs, body and arms randomly. I wanted these to have a vine-like appearance, and look kind of like they were just growing wildly. I also tore paper towels into long stringy looking pieces and randomly placed these around in different places. 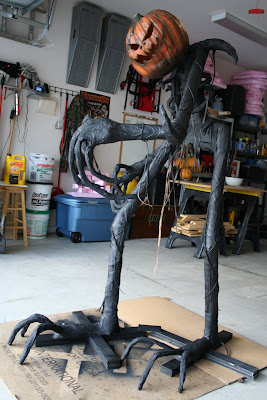 Last, I painted him flat black as a base coat, then went back over that with a couple of shades of brown. I also added some cheesecloth that was dyed brown and shredded up. I put this around the torso area. The head was a foam "Funkin" that I carved and airbrushed. I lit it the same way that I lit the smaller pumpkins, with a candelabra socket and 4 watt bulb.